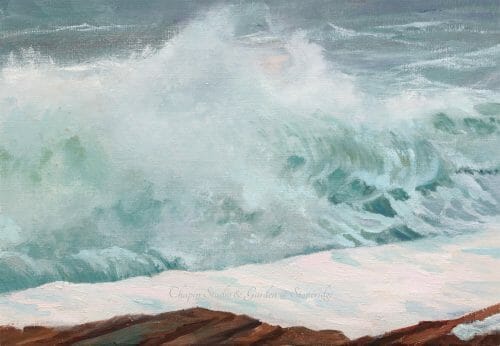 Notes from the Studio:

“​I’ve finished #2 in the series of the White Horses of the Sea.  This turned out to be not just a simple wave painting, lots of complex actions.  Creating the water being drawn back into the new curl and spray with wave actions coming through as well as foam depicting the actions of the slap back.   I don’t know if you can see the subtle variations of tone within the spray but just like a cloud you can develop more volume through several variations of tone within the same value. Thus a lot of vibrancy within the mist. We’re socked in on a cloudy day so a lot of color and subtle transitions seem to be missing from the photo. This one has only one horse but it’s a biggen. “White Horses of the Sea 2”, 12×17 oil on linen. It’s was really mind bending to paint a seascape, then change focus to the horse, then refocus back to waves. At least that’s the way I approached it so my mind was bending. This is original art, a Maine art piece inspired by the poem “White Horses of the Sea” by Elfin. (See Poem ).  I’m doing a series of small pieces showing those foamy steeds till I paint large the museum piece from the series. This the second one. ”

Deborah Chapin’s Marine paintings have a long exhibition history starting with American Society Marine Artists in 1980 at the now defunct Grand Central Galleries in NYC.   As an Independent artist since embarking on her career she has exhibited extensively in top shows and Museums including: Grand Palais and Carrousel de Louvre in Paris with the Societe National des Beaux Arts, Mystic Seaport Gallery International since it’s inception in 1982, Of Ships and Sea Exhibits at Greenwich Workshop Gallery,  Artist of America Exhibitions Colorado Historical Museum, Ketterer Kunst Auctions, and Lectured on plein air painting at the Smithsonian American Art Museum just to name a few.    All this was accomplished without the aid or support of galleries, art groups or spouse.   At the time of her debut she one of two women in the national exhibitions of Marine Art.   See more information    https://gallery.deborahchapin.com/exhibition-history-of-35-years-in-paint-by-deborah-chapin/    She now resides in Maine and is working on a new portfolio of work and commission paintings for select collectors in her private studio/gallery.