Blue Indigo, was painted during a storm hitched to the back of my car.  It is part of my personal collection but it has been exhibited at the National Arts Club, the Ketterer Kunst in Hamburg Germany, and presented as part of my talk on storm paintings at the Smithsonian American Art Museum 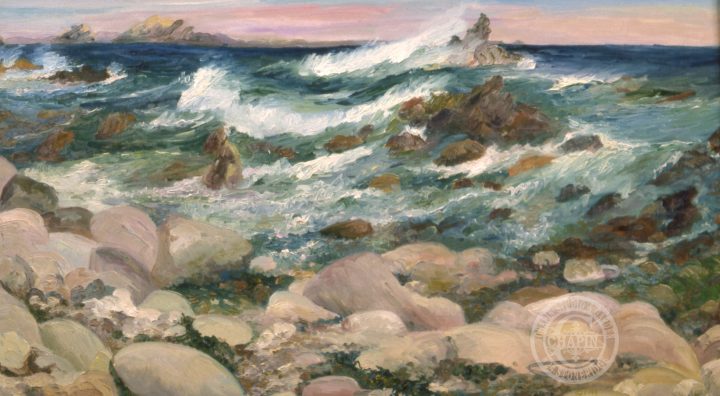 Like the other Storm Pieces Plage des Blanches Roches was painted during a storm.   This one was painted on Diben’s coast.  Presented in Smithsonian American Art Museum talk of Sea and Surf en plein air and published in the Artist Magazine. 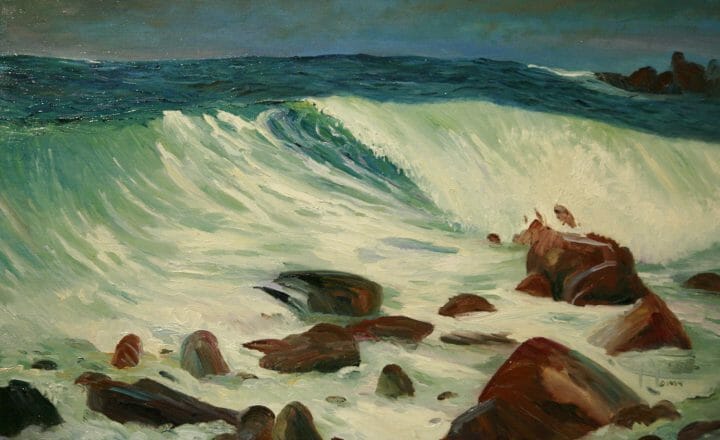 Vagues Contra les Roches, was painted during a storm.  It was part of the talk on storm paintings at the Smithsonian American Art Museum and Published in American Art Magazine. 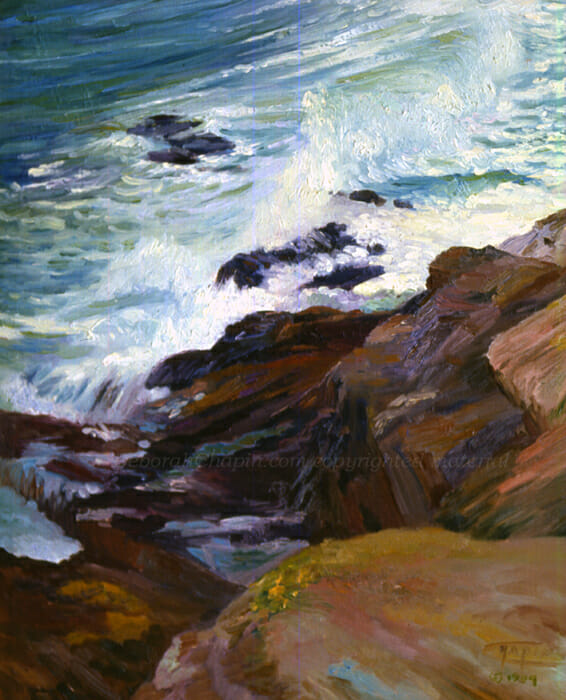 Recently I received the Life Time Achievement Award from Who’s Who because of my Who’s Who in American Art. Jeannie and I had a long conversation about my life and works where she asked questions I’d never been asked before. A couple come to mind:

Why did you become interested in doing Arts? I had never been asked this question before but came up with the answer pretty quickly.  My father introduced me to a world of culture through his love of music and I remember he purchased a print of Renoirs “Two Sisters on the Terrace” way back when we lived in Billings Montana.  He hung it at the top of the stairs and every time my parakeet escaped the bird would land on the top of the frame of the print.  My dad later bought a scene of South Londonderry where he was born.  The painting (which had been exhibited at Grand Central Galleries)  was painted by Harry Shokler a Vermont  Landscape Painter.    He also taught me a love of nature (since he was a forester and management of lands with the BLM) and gardening so it seemed natural to explore the arts and nature which eventually evolved into my love of expressing nature in fine art.

When did you start in the arts? I first started in the arts through music when I was in the 3rd grade I guess about 8 years old and drawing classes about the same age.  I also started craft projects and my grandmother taught me making tatted lace early on.  I think I did my first painting when we moved to Duluth so when I was in Junior High School.

What do you think is your proudest Achievement? I could list my accolades but I think the most rewarding achievement is when I captured a series of storm paintings in Brittany by painting them in situ and capturing them in larger format.  I don’t know that it would be possible to do this now, but I will always be trying to reach that level and surpass it in someway.  Capturing the spirit of nature and translating it into paint is my proudest achievement.

Do you want to mention someone who has had an influence on your career?
Yes, I would like to say that Mary Ekroos was throughout my career one of my staunchest supporters.  I asked her to do critiques back when I was first starting out and she would write these long letters explaining all the critiques in text and return the slide.  Way more effort than the $5.00 she was paid to do the critiques.  I probably still have those letters somewhere.  Finding them may be a challenge.  I’d also like to mention Raymond Kinstler.  I took a couple of workshops from him but I think he should be mentioned because of his generous spirit.  He was a very accomplished artist and always busy but he took time to come down to see my work in my One-Person show at the National Arts Club and he sponsored me for membership and took charge of the interview  when I became a member.  He didn’t have to help out other artists but that should be recognized as it is a model for the way artists can help others.  I’d also like to mention my collectors many of which have collected my work for 30 years and supported my efforts through out my career.  By buying artwork they have made the journey possible.  When I sold February Blast to Mr & Mrs Majane, that $7000 paid for my trip to Australia.    Many of them have been my friends throughout my career and many have passed on and I miss them.  Their advocacy was against the tide of the politics in the artworld itself.  Championing a woman artist when it wasn’t the thing to do.  Their role as trustees of the art for the coming generations and support for the arts and culture in a society in general, which doesn’t really reward that support, has always been appreciated and should be recognized as an integral part of the arts.

I hope to obtain a copy of the recording which I can post here on my site, we’ll see.

Want to be the first to know before the rest of the world.  Subscribe to my Newsletter at: https://gallery.deborahchapin.com/subscribe/

This summer has really gone by very quickly.  I can not say that I have managed to do everything I wanted to what with hot weather then rain then hot weather then rain, and some brilliantly beautiful days scattered about.  I did manage to go out and paint at Reid State Park last week? and captured a nice little piece which I am calling the last of summer, but the overriding amount of time has been invested in marketing because it seems to have totally disappeared with COVID.  So here we are at the beginning of Fall and looking into the winter months and wondering what’s next.

I’m putting the small little figures that are on the beach in and tweaking it a bit more but essentially the overcast day describes my mood. 🙂

Log from the day: I had a great day painting at Reid Park and painted on Griffith point. The Plein air Painters of Maine were out there but I only saw a few and they were in a different location.  Big place so really unless you’re all painting at the same location you don’t see each other.

It was a great location and I can envision having other pieces that would be good. I did a sketch and I’m going to tweak some of the foreground stones. But great color to work with. Such fun to finally be getting in the groove. This is where I stopped yesterday and I have some work to do this morning but I will get to it this afternoon.

I think the location that I picked would make a great large piece and and I have to see in a different types of weather too.

I traveled over over to the other side and saw a perfect location for the fall at dusk.

Want to be the first to know before the rest of the world.  Subscribe to my Newsletter at: https://gallery.deborahchapin.com/subscribe/

Getting to Know Me

As part of the journey through the coast of Maine, getting to know the coast of Maine and people getting to know me,  I am doing a series of LIVE on Instagram painting sessions.  I’m naturally reticent to be in front of the camera but willing to appear a little foolish as I learn how to do this.  Technology not always being cooperative and some days forgetting my words at home.